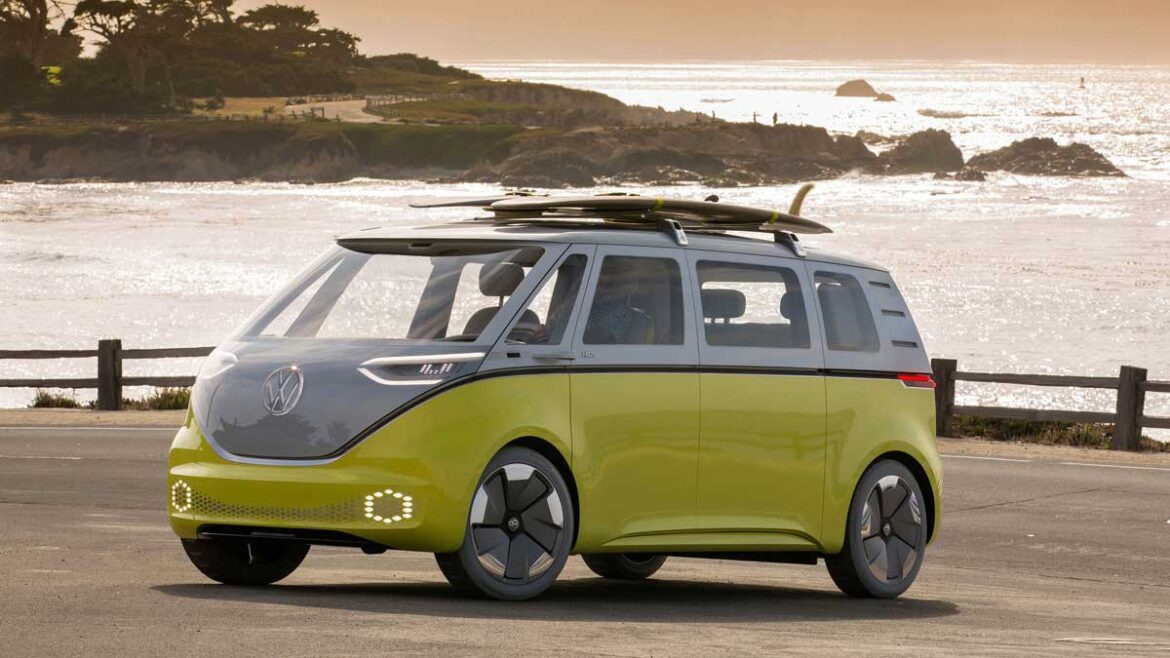 According to Volkswagen CEO Ralf Brandstätter, there will be everything from an ID.1 mini car to an ID.7 electric version of the Kombi.

The new VW I.D. Buzz will cost north of $40,000, but its electric range will beat the all-electric Chevy Bolt, and even the much higher priced Tesla Model S.

Volkswagen is now several months into its electric ID series with the popular ID.3 electric hatch and the ID.4 electric crossover SUV.

In essence, both are electric versions of the German car maker’s two most popular vehicles: the Golf and the Tiguan.

From 2022 we will see the VW ID.7, which is essentially an electric Kombi. First unveiled by Volkswagen as the ID Buzz concept in 2017, it promises to be the German car maker’s electric transporter for the future.

It will pack an 82kWh battery but Brandstätter told Autocar that because of its aerodynamics, it will likely have a driving range of around 400km.

The ID.7  will be offered in a seven-seater version as well as a commercial variant. Both a long and short wheelbase will be offered with either a single rear motor or dual motors for all-wheel drive.

Volkswagen is reviving the iconic Flower Child mobile in its all-new electric avatar. The Microbus will hit dealerships in 2023 in the US.

The electric Kombi will be manufactured in Hannover in Germany. Unofficially, this concept has many names — the Microbus in North America, the Bulli in Germany, or simply VW Bus. Like its once upon a time internal combustion engine sibling, the ID Buzz will be offered as both a passenger and a commercial vehicle, a first for VW’s all-electric ID range.

Iconic vehicles continue to hold a special place even after they no longer are manufactured and have a tight close community and the same is in the case of the VW Bus. Even though it’s been over 40 years since the production of the last Microbus, may it be in Europe, the United Kingdom, or the Pacific coast of North America, it doesn’t take long for proud owners of the van to park next to each other and swap their adventure stories. Volkswagen is confident that the ID Buzz will kick start a new era of electric van culture. For a more in depth look check out CNN Business https://amp-cnn-com.cdn.ampproject.org/v/s/amp.cnn.com/cnn/2022/03/09/business/volkswagen-id-buzz/index.html?amp_gsa=1&amp_js_v=a9&usqp=mq331AQIKAGwASCAAgM%3D#amp_tf=From%20%251%24s&aoh=16469551335654&csi=0&referrer=https%3A%2F%2Fwww.google.com&ampshare=https%3A%2F%2Fwww.cnn.com%2F2022%2F03%2F09%2Fbusiness%2Fvolkswagen-id-buzz%2Findex.html]

Since publishing this story the Kombi has now officially been released.