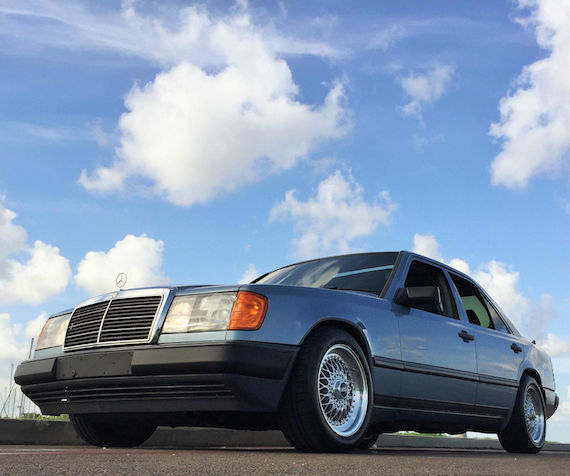 The 300ZX was a street fighter back in the day, but even before the ’90s ended, this coupe began to seem like an artifact of an earlier era. This coupe entered a long period of hibernation and has only begun to emerge as the values of its competitors started to notch upward. As with its main competitors, the worst-kept examples of the 300ZX dropped some time ago, leaving only the best-kept ones and the slightly scuffed and neglected but repairable examples that could use a visit to a specialist shop.

The 300ZX Turbo has been ignored for a while, and we have the timing of its debut to blame for that, in addition to a relatively high price when new. Collectors are coming around to these coupes just now, which means the door is rapidly closing on the best examples of this model. Canadians are importing the JDM Nissan Fairlady version of this car, which should be a sign of things to come.

Mercedes’ drop-top flagship of the 1990s is one of those cars that can still be found on the fairly cheap and with minimal mileage, having long been the summer driver of choice for wealthy elderly couples living on the coasts. You’ll have Sheldon and Barb to thank for racking up minimal miles on their garage-kept SL-Class and for taking it to the dealer to get windshield washer fill-ups. However, deferred maintenance can be a problem with these, though, and we hear some parts are now becoming unobtainium, even at an official dealer. The R129-generation SL-Class exists in that ‘sweet spot’ now where very tidy examples are starting to command some respectable money, but condition and spec do vary widely.

The V12-engined beasties have always been pricey unless they were obviously ill-treated. There is still a good selection of SL500s and earlier six-cylinder models that are pretty tidy and can be had for a minimum amount—but bargain hunters still remain wary of their maintenance costs.

The W124-generation E-Class debuted in the late 1980s, and the values of the tidiest examples have been giving the SL-Class a run for its money. Being a leisure-mobile, a lot of these convertibles were used sparingly and typically in very favorable climates, not counting a few hurricanes that battered the South Atlantic coast. So gently used examples with plenty of golf balls in various interior seat pockets are still very easy to find. The hydraulics for the powered tops in these are said to be expensive items to fix, but the cleanest examples are starting to bring serious bucks. Values are inching up slowly, and there are still some bargains to be found.

Serving up 200 hp courtesy of a turbocharged inline-four paired with a five-speed manual transmission, a lot of these were used up and thrown out (or wrapped around a fire hydrant) way before the clock rolled over into the year 2000.

The reason these are becoming a bit of it a hot item in the unmessed-with condition is identical to that of the MR2 Turbo below: It was a niche performance back in the day for those interested in loud fast and furious driving, so now it’s difficult to find one that hasn’t been driven like it was on the set of the movie. The surviving examples serve as a window into the best-handling cars that Toyota had to offer a quarter-century ago.

The 200-hp second-generation Miata of the ’90s got a turbo to play with, also gaining a more luxurious interior, rounder styling, and a much-improved suspension. Just like the first-gen Miata, the MR2 Turbo looked tiny if viewed through today’s eyes—more like a jet pack that you’d wear than an actual car. And that’s what made it so great, quietly eclipsing the somewhat finicky first-gen model. The second-gen MR2 Turbo served up very sharp handling, helped by a modest curb weight and more power than a Miata of the day, all while offering a very engaging driving experience and also being able to be driven slowly when needed.

Enthusiasts are snapping them up, but later MR2 values haven’t crashed through the ceiling just yet. In another couple of years, these will all be consumed by enthusiasts and collectors who will want a king’s ransom for one.

So this is the rundown and just like the stock market predictions, we have just given you a few investment tips for your future haul. Take time to study the trends and figure out which ones you want to stock up on. Happy hunting. Oh and don’t forget to let us know which haul you got, have, or are considering in the comments section below.