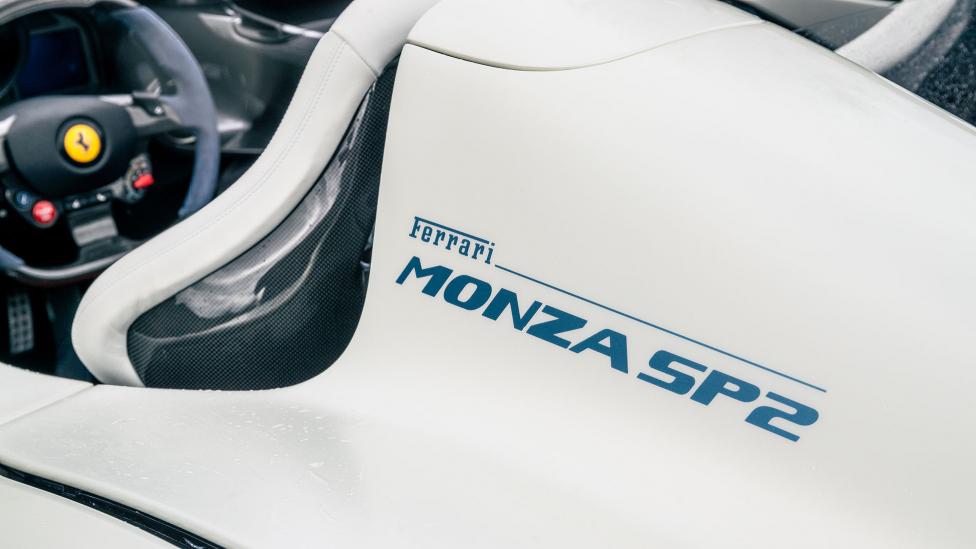 Welcome to the first of Maranello’s new line of ‘Icona’ cars – limited editions inspired by Ferrari’s illustrious back catalog. The Monza, a roofless, windowless rollerskate based on the 812 Superfast – is the first of these. Ferrari is saying there would only be 499 built, and you guessed it, they’re all sold out, at $1.9m/£1.4m a pop including tax.

Ferrari offered a duo of Monza body styles: hedonistic single-seat SP1, or this more sociable two-seat SP2. Ferrari won’t reveal what the split between SP1 and SP2 commissions was, but word is each Ferrari-approved buyer could only pick one. No matching pairs for your collection.

The bodywork is super sexy, inspired by the 750 Monza and 860 Monza racing cars of the mid-1950s, and is highlighted in the voluptuous front wing curves, the abrupt rear buttresses, and the choice of seating.

All of that gorgeous coachwork is carbon fiber, and it’s all expensively bespoke. Even the LED light units are unusually a slender lightbar instead of quad round-lenses at the rear – and those turbine-spoke wheels are fresh and unrecycled from other Ferraris – essentially a brand new design.

Underneath, the Monza’s foundations are more familiar but hardly ordinary. The front-mid-mounted 6.5-litre naturally aspirated V12 engine is lifted from Ferrari’s psychotic super-GT, the 812 Superfast. Having received a token 10bhp and 1lb-ft power bump, it slots in under the new front-hinged clamshell bonnet, assaulting the usual seven-speed twin-clutch gearbox with a total of 799bhp and 530lb-ft. There’s no SF90-style hybrid boost, and it’s rear-wheel drive. We rest our case!

While the Monza has said goodbye to anything resembling weather protection, it’s far from being a lightweight. The SP1 weighs in at 3,306lbs dry, while this SP2 is 3,351lbs. Ready to roll with fuel, fluids, and a driver strapped inside, it’ll be knocking on the door of 1.7 tonnes.

But you sense this is a rare thing in Ferrariland: a supercar that doesn’t sweat the numbers. Outlandish downforce claims are absent and Ferrari hasn’t bothered with a Fiorano lap time. Even the top speed is officially quoted as ‘over 186mph’. Daring you to go find out, whilst seeming to hint the Monza is all about the experience, not the data, and what an experience it must be.

“A mind-blowing assault on your senses, but not the finest device to experience Ferrari’s phenomenal V12 engine from within”

So, to the question at hand is the Monza the most pointless Ferrari ever? Well here’s how we see it, It lacks a smidgen of practicality, and even on the deserted road of your dreams and or fantasies, you’re probably too terrified to push it to its limits, for fear of being a permanent fixture on the scenery you’re zooming past.

The Monza feels a bit like a riposte to naysayers who reckon supercars are now too liveable, too easy to drive, not scary or silly enough. Here’s a Ferrari that you can only drive on sunny days, and even if you’ve got an F1 track to yourself, it’ll still spit you off into the kitty litter if you look at the gas pedal funny. We kid you not.

It’s a wild, unsanitized, utterly unhinged ride – one we can’t make a rational case for.

Of course, the money could be better spent on an 812 GTS for enjoying the engine noise in, a 355 Spider for Sunday morning laps and a million dollars worth of gas and tyres.

But that’s not the language of the super-rich. Most of the satisfaction comes from the joy of just owning a Monza, acquiring something only a select few hundred Ferrari aficionados were chosen for. It’s a trinket, but don’t dare disrespect it.