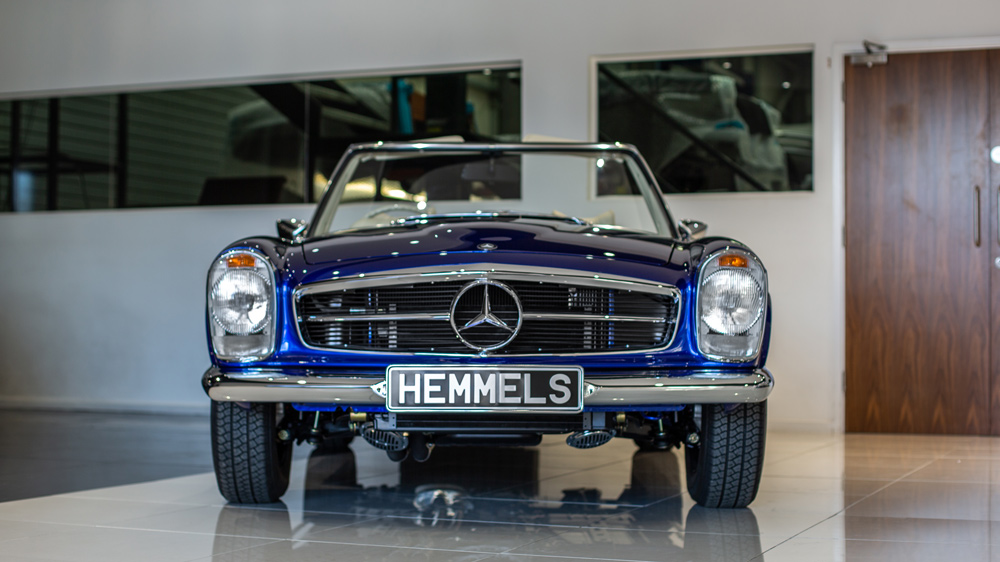 Hemmels are a British Auto Restoration company with an obsession for Mercedes Benz Classics. Hemmels are based in Cardiff, Wales. Since 2016, Hemmels has had only one goal in mind, to do ground-up rebuilds of vintage Mercedes 300 SL Gullwings and Roadsters, 190SLs, and 280SLs—the latter best known as “Pagodas” for their squared-off roofs.

The word “restoration” doesn’t do Hemmels’ work justice. The company, in fact, trademarked its process with the name Neugeboren, or “newborn” in German, a nod to the fact that Hemmels believes customers should view the result of each 12-month project as a new car, one-year warranty included.

What with 50 examples of these electric vehicles already completed, Hemmels has now decided to expand its Mercedes-focused mission to include environmental sustainability. The company says they are now taking orders on the first batch of a dozen electrified 280SL Pagodas. They plan to build each of them to look visually identical to the storied two-door convertible runabout, but be powered by British-supplied batteries and electric motors capable of a 200-mile range and roughly the same 160 hp made by the original car’s inline-six engine. So for $295,000, you get to choose your own paint and leather color scheme, and suggest any manner of other tweaks the Hemmels team is capable of providing. Thats pretty awesome considering you are getting an exact identical just more environmentally sustainable.

“For the other cars we offer, many of our clients grew up emotionally attracted to them, maybe their parents had one or they saw them as kids on the street,” says Wood. “But with the electrified 280SL, we are aiming for a car that perhaps will appeal to a younger generation who may not know the car. Instead, they like the look but are also concerned about sustainability.”

The general premise and idea behind what Hemmels is doing are pretty admirable because a lot of the younger generation simply don’t understand what made these cars the iconic classics they have become. Perhaps they may never bother, with all the new runners around spoilt for choice. But with companies like Hemmels doing what they do by breathing new life into these cars and upgrading them to fit today’s world standards, the future of classics can be neatly preserved. For future generations to come and lovers of all things vintage in the present. Although we do wonder how many of us can afford the price tag to own one of these. Maybe in time as they become more widely accessible prices might dip (we wish*). Because we wonder about the newer Mercedes and even some of the regular oldies, cost-wise, they are more affordable with all the bells and whistles of modern technology, we can’t help but wonder why not those instead of a classic electric restomod (modern restoration) Merc? This is where we suppose taste, style, desire, and affordability meet like a dysfunctional family reunion. Our point? It’s all relative.