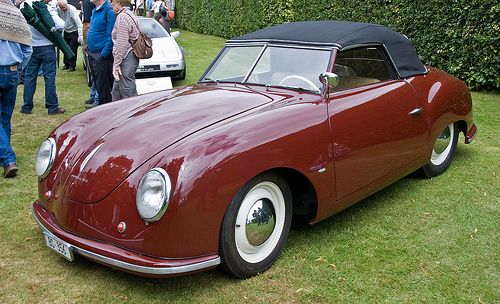 Monterey, California August 17th, a spectacular auction is taking place, the RM Sotheby’s auction of the 1939 Porsche Type 64 the very first automobile to be made by Ferdinand Porsche under the National Socialist Motor Corps for Nazi propaganda using VW Parts.

We previously talked about the Type 64 in our – First-Ever Porsche feature article on Lussoautos.

We trailed the whereabouts of this stand-alone Porsche whom ‘Porsche Motors’ as an organization does not affiliate with and the controversy surrounding the ‘infamous Type 64 botched sale at auction. Here’s what we found…

After founding his eponymous consulting firm in 1931, Ferdinand Porsche worked as a hired hand for European automakers, including Volkswagen and Mercedes-Daimler, long before he made the Type 64 coupe, which was initially black. He developed the coupe on commission from the National Socialist Motor Corps for Nazi propaganda purposes. That was nearly 10 years before the Porsche brand he later founded produced its first car, the 1948 Porsche 365 Gmuend Coupe.

The Auction at RM Sotheby’s

When the Nazi Porsche Type 64 was brought to auction in Monterey, California on August 17, everyone believed they were about to be a part of something exclusive and special, there is only one Type 64 after all, and its sale was supposed to be epic, except a sale never actually materialized. It was not difficult to understand what had happened.

The auction catalog noted that the Type 64 came with a “Bill of Sale Only,” RM Sotheby’s now says its German owners—since revealed as the billionaire Schoerghuber family active in the beverage, hotels, and aircraft industries—hold a “European title” of ownership, rather than a bill of sale statement declaring proof of a transaction. In the grand scheme of things, the switch doesn’t affect much. Very old cars, especially race cars, often lack titles. However, you didn’t have to be at Monterey on auction night to sense the impact of the scandal; the volume of YouTube views and Instagram comments on the incident quickly escalated into the hundreds of thousands. Collectors, enthusiasts, and onlookers alike were shaken.

RM Sothebys had begun their auction with the auctioneer churning out figures and eager bidders looking on. Before long, the numbers had become astronomically high to the dismay of onlooking bidders who wondered how the Type 64 had gone up to $70 million in increments of $10 million per bid, with no actual human bids. Clearly, the bidders were aware of the ‘chandelier bidding‘ (the art of auctioneers upping a bid amount to encourage bidding on a slow bid) going on but still figured the price was tethering too high even at that. The hope for RMSotheby’s was that the imaginary numbers will drive up the dollar amount of bids up to near the item’s reserve value, at which point it’s hoped that an actual human will possibly offer a legitimate bid. In this instance, no one did. Onlookers were dismayed. But this was not the icing on the cake, not just yet. The link below is from an actual onlooker present at the auction.

They say that, since it was known among insiders that there was no bid to be had, Ten Holder either attempted a sort of tongue-in-cheek comic relief that went wrong or deliberately under-pronounced words in order to somehow jump-start live bidding.

“My view is there was not one bid at that auction—not one,” Bennion says. “The car has been for sale for a number of years. It has been offered to all the big collectors and to Porsche, and they have rejected it. It was always going to be a difficult sale. RM Sotheby’s pushed the car very hard. There was a lot of media done to raise its profile. If Porsche itself didn’t want it, and that was known in the market, then the likelihood of RM selling it was very slim.”

Then the auctioneer, who spoke with a thick native dutch accent (Ten Holder is a polyglot) asked the bid caller to adjust the numbers on the screen indicating there was some type of ‘snafu’ with the figures even laughing it off as an accent versus hearing issue, changing it from $70million to $17million, it was an understatement to say that the numeric adjustment displeased the crowd. People actually started booing and yelling “fraud,” “fake,” and “scam.” Others walked out. Bloomberg News covered the blow-by-blow.  Needless to say, the car did not sell that day.

As for the Type 64, it will be “jolly difficult, if not impossible” for the Schoerghubers to win a lawsuit against RM Sotheby’s complaining about the botched sale, Bennion says. “The terms and conditions are very clear.”

Damon Bennion | a London-based contract lawyer specializing in the collector car market who was present during the auction.

It doesn’t help that the industry has very little regulation, unlike other venues for traded commodities. Auction houses use the proviso “terms and conditions apply” to its full extent, allowing them to act as middlemen rather than assume any culpability for the quality and authenticity of what they sell. A good example to better understand an auction house spectacle would be to read the article on the drama that ensued surrounding the 1958 Porsche 356 Speedster that Jerry Seinfeld commissioned to Gooding & Co. in 2016.

Usually, what tends to happen when there is no buyer for a particular car at a major auction, is the terms and conditions apply again, in the case of the Type 64, it stipulates that RM Sotheby’s reserves the right to try to sell the Type 64 for 60 business days following the auction. The idea is that the $17 million reserve can be adjusted down to a more realistic number and a deal done privately with a new buyer. That is the hope. But for right now, the car is likely to remain in California for that time period, because, the United States presents a broader buyer’s market. If it finds no takers or a new home, it’ll return to the Schoerghubers,(original owners) may be likely to re-emerge in a few years with a new owner after the scandal blows over—if the scandal blows over.

But for now, Lussoautos will keep our ears rooted to the ground to follow any leads on the Porsche type 64 and fill you in.

One thought on “Nazi Porsche Type ’64- The ‘snafu’ with the sale and where it is now?”