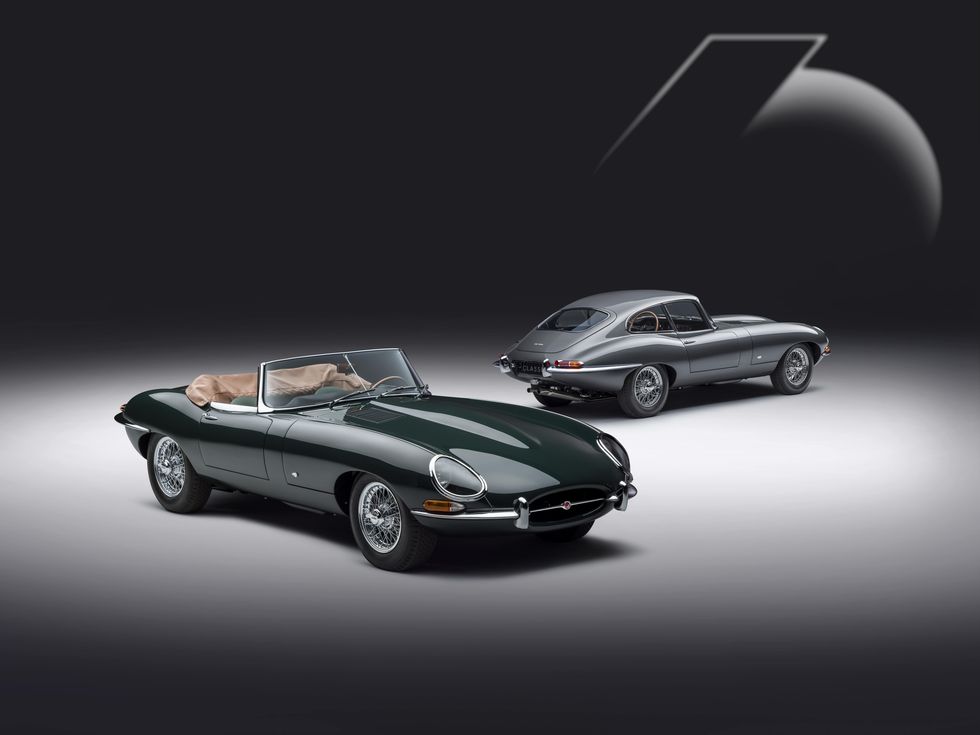 Jaguar decided to commemorate the 60th anniversary of their E- Type by serving up a ‘brace’ (pair) of limited edition E-Types, a coupe, and a convertible. They’re sold only in pairs, as they should be, with only six pairs made, to commemorate the 60th anniversary of the iconic E-Type first shown to the world at the Geneva Motor Show on March 15, 1961.

Plans began circulating last summer, but now some are actually finished and we can begin to behold the first looks of the double beauties.

The cars are Series I E-Types that have been more than just restored.

Jaguar says these E-Types are reborn unlike the continuation models of the DTypes and C-Types “All are comprehensively restored and uprated vehicles, using 1960s donor cars.”

They are powered by rebuilt 3.8-liter straight-sixes but are mated to specially developed five-speed manuals with synchromesh, helical cut gears, and a reinforced cast-aluminum casing “designed to deliver enhanced reliability and greater durability,” as well as closer gear ratios and smoother gear changes. The straight-six makes 265 hp and benefits from a “1961-style” alloy radiator with the electric cooling fan already on it. There’s also electronic ignition and stainless-steel exhaust which we reckon will make ‘true’ petrol heads happy.

The History Of The E-Type: The Short Version

Before the 1961 Geneva launch, the Jaguar was lent discreetly to UK reporters so they could prepare their reviews with very little time in between till its big reveal. As a result, the E-Type was driven from Coventry to Parc Des Eaux-Vives by the then Jaguar Exec, Bob Berry arriving with 20 minutes to spare. It did so well on test drives another one was rushed from Coventry to Geneva overnight.

Norman Dewis Jaguars test driver drove the open top and was expressly told to drop everything to make the drive. He drove through the night. Made it to the launch with the press and everyone applauding.

During the exclusive three-day driving experience you’ll be joined by like-minded individuals as you venture across the most scenic of trans-European routes – all uncovered from behind the wheel of the E-type 60 Collection.

The E-Types are available in right-hand drive and left-hand drive too. Prices have not really been mentioned by Jaguar or if any of the pairs have been sold but Jaguar says they have orders lined up. The E-Type has always been an iconic model by the British Automaker and so it is fantastic they have made the pair to commemorate this anniversary. We tip our hats to Jaguar and congratulate them on a successful celebration. For more information on the 60th anniversary, Jaguar E-Type pairs click on https://www.jaguar.com/about-jaguar/jaguar-classic/authentic-cars/e-type-60-collection.html