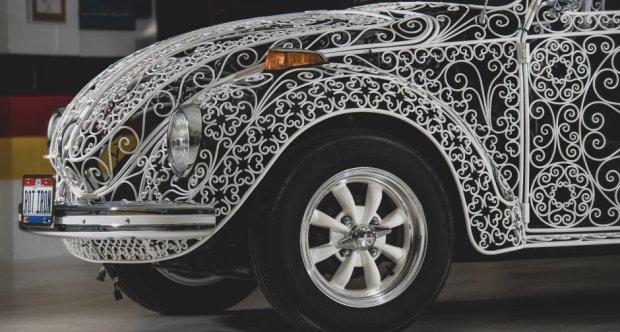 In honor of Leonardo da Vinci’s birthday, Volkswagen highlighted one of the most interesting examples of customized VWs from its archives. Aptly dubbed the Wedding Beetle, this custom creation is a coach-built carriage fit to carry Cinderella to a ball. Or, more realistically, folks away from and to their wedding.

Rafael Esparza-Prieto was asked by his boss to create a custom Beetle to attract customers to the parts store where he worked, and he created this wild creation—by hand!—from a pile of wrought iron. Esparza-Prieto was no stranger to shaping metal, as you can see from the quality of the decorative ironwork that holds the shape of a Volkswagen Beetle, without any of its original bodywork in place. His creation was popular enough to catch Volkswagen’s eye ahead of the 1968 Olympic games and so Volkswagen commissioned Esparza-Prieto to build two more based on functioning chassis. Esparaza then went on to build more than 20 of these amazing creations.

Now, we’re not sure what Leonardo da Vinci would think of this Volkswagen, mostly because he would probably be bewildered by the magic of internal combustion. However, we’re certain he would appreciate the efforts of Esparza-Prieto.

Volkswagen’s relationship with Mexico got off to a fruitful start in the early 1960s, when the German automaker’s representatives realized the potential for the Latin American market. Not only was its labor force eager, the burgeoning economy was in need of its own people’s car. By the time Mexico City hosted the 1968 Summer Olympics, VW was already ingrained in the City of Palaces. Beetles were increasingly common both on the capital city’s wide boulevards and in its narrow, historic alleys. Two Beetle bodies were created using a relatively simple wrought-iron design to promote Volkswagen when the world’s athletes traveled to Mexico City. The wrought-iron cars were a lasting icon that would become ingrained in VW de Mexico lore.

A few years later, artist and master blacksmith Rafael Esparza-Prieto was asked to celebrate the car’s already monumental achievement by recreating the iconic Beetle body in wrought iron for automakers Aguascalientes’ Mexico assembly plant. So thrilled with the project was Montecito, California, Mexican restaurant owner Jose Barajas that he commissioned his own wrought-iron Beetle in the early 1980s. The material had long been associated with Mexican design, particularly in the fences and gates that surrounded every level of abode. The design Esparza-Prieto created features 2,600 individual floral-inspired curlicue designs and was crafted using only a hammer and an anvil prior to being painted white.

The fully functional lace-patterned Beetle was unveiled at Barajas’ Casa Linda restaurant in Montecito in 1985 and long remained with the restaurant, serving as an occasional shuttle to transport restaurant-goers back to nearby Santa Barbara. The intricate car was as much a draw for some as the restaurant’s legendary cuisine. Its wrought-iron body sits over a 1970 Beetle interior, chassis, and powertrain, which is stock down to the Blaupunkt AM radio and 90 mph speedometer. The car’s exceptional craftsmanship and exacting silhouette maintain that iconic Beetle shape. This masterpiece is as much a piece of art as it is a car, a true “art car” that will be the center of attention in nearly any collection – Photos and Information Courtesy Sotheby’s